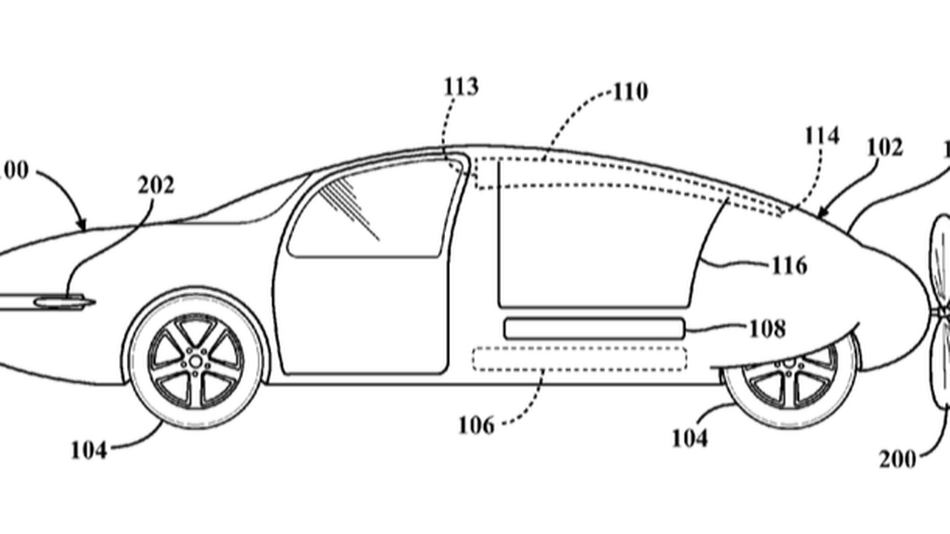 A recently published patent application filed by Toyota in December, 2014 reveals a shape-morphing fuselage for an ‘aero car’.

It’s not that far flung

Few would have predicted 10 years ago that a quadcopter would be used to for legal urban medicine delivery in the United States. These days however, few would argue that we are not within the lifetime of a patent away from composite air-land vehicles becoming a thing… that’s 20 years to be precise. Whilst the Jetson’s of the 60’s or the Moller Skycar of the 90’s would never become a reality – in 2016 there are no longer any fundamental technological barriers to personal flight using composite air-land vehicles and Toyota knows that. The gap to be bridged is more a matter of investment in technological ‘reduction to practice’ (forgive the patent lingo). That is to say, the flying car, like the electric car needed an Elon Musk, needs investment, single-eyed focus there’s that regulatory thing too – but that just requires time, and patience, right?

Commentators who have reviewed this patent have been thrown off the scent by Toyota’s use of child-like design elements in the drawings. Propellers that look like they are off a toy boat and a fuselage that morphs into a Citroen D series make it difficult to see what Toyota is really getting at. Want to know what Toyota is really protecting? Read on.

Claim 1 and Claim 8 are the broadest statements of Toyota’s invention and they are definitely not limited to a flying car with a propeller and big back side. First variants of this technology on a composite air-land vehicle or ‘flying car’ are likely to look much less like Toyota’s patent drawings and much more like the EHANG 184 drone – add wheels and a steering column. Let’s take a closer look at what this patent is really about:

When the fuselage of the flying car is moving through the air it needs to present the minimum possible frontal surface area to the oncoming air to reduce drag. So Toyota has designed a fuselage that can move to a contracted (smaller frontal surface area) configuration during flight, however, there is no such requirement during land movement hence the extended configuration. This would be a seriously valuable patent claim if the patent application is granted with a 20 year monopoly period right through to 19 December 2034.

This claim essentially addresses a wing deployment system. Ultimately, there are much more aerodynamically efficient designs for a flying car than a quadcopter – aeroplanes. There is, however, an intermediate type of vehicle that is conceivable that would present the benefits of both a quadcopter and a fixed-wing aeroplane. That is – the aerocar drives on land like a car, performs delicate flight operations such as VTOL using quadcopter capabilities and then extends the wings for increased efficiency during horizontal flight.

Always remember to look beyond the patent drawings in trying to understand why a company is filing a patent. The true intention of a patent application is often most clearly revealed in the claims.