Esco Corporation (“ESCO”) was the applicant for Australian standard patent application no. 2011201135 entitled “Wear Assembly”.  Paragraph 1 of the application provides that the invention “pertains to a wear assembly for securing a wear member to excavating equipment”.  At paragraph 3, the Specification states that “wear parts are commonly attached to excavating equipment, such as excavating buckets or cutterheads, to protect equipment from wear and to enhance digging operation”.

Below is shown Figure 1 of the drawings, illustrating a wear assembly having a base (15) with two rear legs (21) and a wear member (12) placed on a nose of the base (15) and attached thereto. 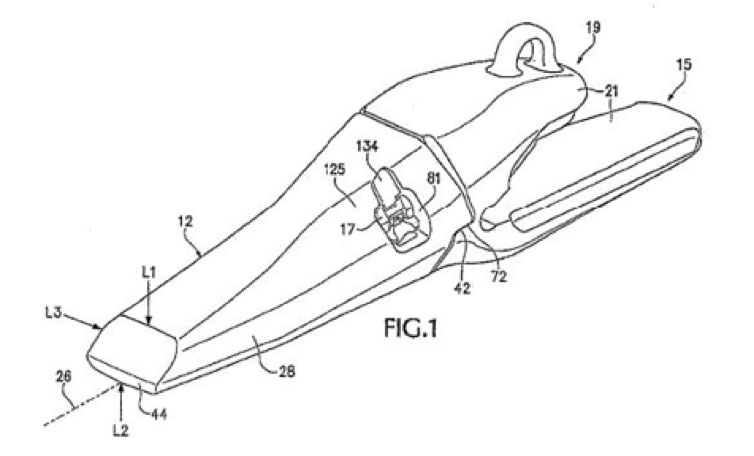 Specifically, independent Claim 1, in the first group of Claims, defined:

Independent Claim 19, in the second group of Claims, defined:

Importantly in relation to the issue of utility, paragraph 6 of the Specification states that “[t]he present invention pertains to an improved wear assembly for securing wear members to excavating equipment for enhanced stability, strength, durability, penetration, safety and ease of replacement”.

At first instance, Ronneby Road Pty Ltd (“Ronneby”) argued that each and every stated advantage in paragraph 6 was a promise to be fulfilled by each and every Claim.  ESCO, on the other hand, argued that the advantages were not promises but rather purposes or advantages of a general want, as indicated by use of the term “pertains to” in paragraph 6.  Instead, ESCO contended that aspects of the invention described in paragraph 15 of the Specification were the true source of the promise.

Paragraph 15 of the Specification provides, “[i]n one other aspect of the invention, the lock is integrally secured to the wear member for shipping and storage as a single integral component. The lock is maintained within the lock opening irrespective of the insertion of the nose into the cavity, which results in less shipping costs, reduced storage needs, and less inventory concerns.”

Also relevant was paragraph 16 of the Specification, which provides, “[i]n another aspect of the invention, the lock is releasably securable in the lock opening in the wear member in both hold and release positions to reduce the risk of dropping or losing the lock during installation. Such an assembly involves fewer independent components and an easier installation procedure.”

The Primary Judge considered that the six stated advantages in paragraph 6 of the Specification constituted six promises, each and every one of which was required to be attained by each and every Claim.  Given then that none of the Claims were considered to achieve the promises of enhanced strength, durability, or penetration, the Primary Judge found that the promised result was not delivered by the invention as claimed, leaving all Claims lacking in utility.

Finally, although it was accepted that paragraph 6 of the Specification did not provide the relevant promise of the invention, in the alternative event that it did, the six stated advantages were not to be considered as a composite promise (as the Primary Judge did). Rather, the promises were to be read disjunctively across the full set of Claims, with any Claim achieving any one of the six promises being considered useful.