Preliminary injunction sought by Apple against Samsung Galaxy in the US 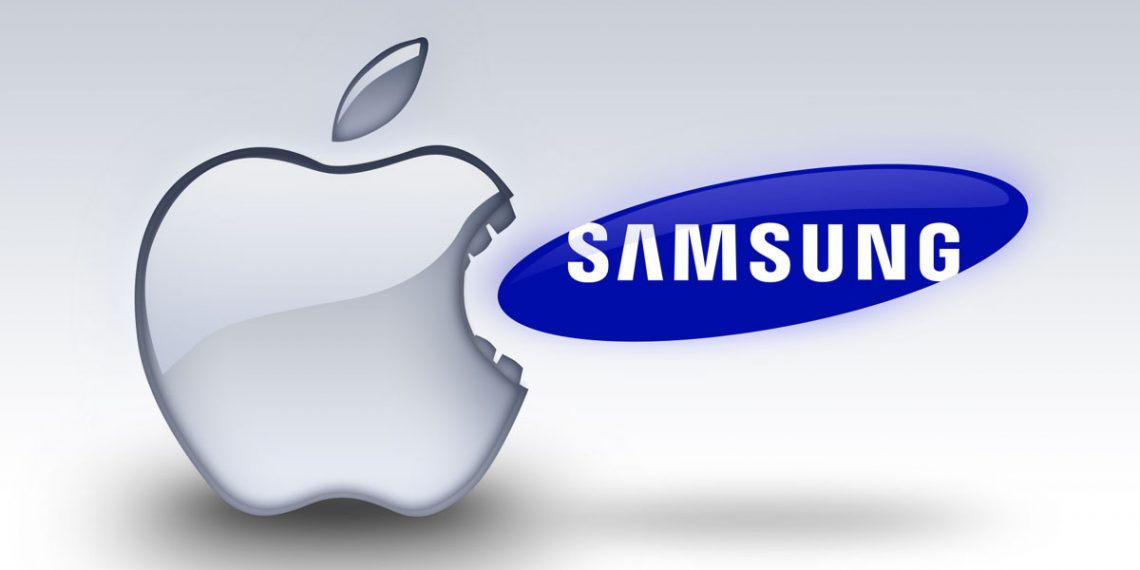 Samsung Electronics Co. Ltd. and Apple, Inc., two of the biggest manufacturers of smartphones and tablets in the world, have been embroiled in a number of bitter patent lawsuits in North America, Europe and Asia in recent times.

In April 2011, Apple initiated proceedings in the United States by filing a patent infringement lawsuit against Samsung Electronics Co. Limited (“Samsung”) in respect of the Apple iPad and iPhone. Apple claimed that Samsung’s line of Galaxy smartphones and tablets infringed upon Apple’s intellectual property and were nothing more than “slavish” copies of the iPhone and iPad designs. The full trial to hear the lawsuit has been scheduled for 30 July 2012, however, both parties have been battling in the Courts over a preliminary injunction sought by Apple Inc. (“Apple”) as part of its lawsuit that would bar Samsung from selling their Galaxy products in the US until the infringement claims are heard at trial.

The D’677 and D’087 patents relate to specific aspects associated with the iPhone, namely, the design choice of a black transparent and glass-like front surface, and the rectangular shape, rounded corners, bezel, speaker placement, and the horizontal shape of the speaker.

The D’899 patent relates to specific aspects associated with the iPad, namely, the rectangular shape with four evenly rounded corners, the flat glass-like surface without any ornamentation, the rim surrounding the front surface, and the back being a flat panel that rounds up near the edges – an overall design that creates a thin form factor.

The ’381 utility patent relates to a method for “List Scrolling and Document Translation, Scaling and Rotation on a Touch-Screen Display“(inertial scrolling). When a user places a finger on a screen and drags a displayed image past the edge of the document and releases the finger, the page bounces back to fill the full screen.

In the US, the Patents Act provides that in cases of patent infringement, a Court may grant injunctions to prevent the violation of any right secured in a patent.

To prevail on its motion of a preliminary injunction against Samsung’s range of Galaxy products, Apple must meet four criteria:

On December 2, 2011, the Federal Judge, Lucy Koh, of the District Court of the Northern District of California, San Jose, heard arguments from Apple and Samsung regarding the four patents in question.

In relation to the D’677 and D’087 patents, Apple alleged that the Samsung Galaxy S 4G and the Samsung Infuse 4G smartphones infringed upon these patents. Samsung counterclaimed by objecting to Apple’s design patents on the ground that they were invalid because the two patents were functional and not within the ambit of a design patent. Samsung also argued that the designs were obvious at the time they were invented based on an existing patent filed in the name of Sharp, JPN No. 1241638 (the ‘638 Patent”).

For the D’677 patent, on the other hand, the District Court considered that it would not have been obvious to a designer to adopt a “flat, black, translucent front screen”, and concluded that Samsung had not raised a substantial question regarding the validity of the D’677 patent. However, the District Court found that Apple was unlikely to suffer irreparable harm from the sale of Samsung’s two Galaxy smartphones in question.

Samsung counterclaimed by arguing that the ‘381 patent was invalid because it was anticipated by an existing patent, WO 03/081458 (LIRA), and by two computer programs, LaunchTile and XNAV.

The District Court found that Apple had established a likelihood to succeed in establishing infringement of the ‘381 patent at trial, but denied Apple’s motion for a preliminary injunction prohibiting sale of the Samsung products that likely infringe Apple’s ’381 patent because Apple had failed to meet its burden of showing likelihood of irreparable harm in the absence of an injunction.

In relation to the D’899 patent, Apple alleged that the Samsung Galaxy Tab 10.1 tablet infringed upon the D’899 patent. Samsung counterclaimed by challenging the validity of the D’889 patent based on functionality. Samsung’s functionality argument is similar to its argument with respect to the D’677 and D’087 cell phone design patents. 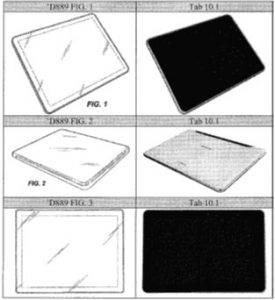 Samsung also challenged the obviousness of the D’889 patent based on prior art references, which included a 2002 Hewlett-Packard Compaq Tablet TC1000 (“the TC1000 tablet”) and a concept for a tablet designed by Knight Ridder Information Design Labs, which featured in an online video in 1994 (“the 1994 Fidler/Knight Ridder tablet”). The Court found that the 1994 Fidler/Knight Ridder tablet created “basically the same visual impression” as the D’889 patent, namely, that it comprised of a simple rectangular tablet with four evenly rounded corners, a front screen that has a flat reflective surface surrounded by a rim on all four sides, and a back-side, being essentially flat. The Court noted some minor differences, but none which distracted from the overall visual appearance of the 1994 Fidler/Knight Ridder tablet as a simple and portable rectangular tablet with the same overall visual impression as the D’889 patent.

The District Court found that while Apple had established that Samsung’s Galaxy Tab 10.1 tablet likely infringed upon the D’889 patent, and that Apple would likely to suffer irreparable harm in the absence of a preliminary injunction, Samsung had raised substantial questions regarding the validity of the D’889 patent, and Apple had not established that it was likely to succeed overall at trial.

The Federal Circuit said that Apple was well within its rights to ask for a ban on sales of the Galaxy Tab 10.1 tablet, and referred the case back to the District Court to consider the balance of hardships and whether the public interest favoured an injunction with respect to the D’889 patent.

On 26th June 2012, the District Court considered the balance of hardships and found that while Samsung would be harmed by being forced to withdraw the Galaxy Tab 10.1 from the market, the harm faced by Apple absent an injunction would be greater. The District Court also found that in light of the Federal Circuit’s ruling that Samsung had not raised a substantial question to the validity of the D’889 patent, the balance of hardship would favour Apple.

The District Court also addressed whether the public interest would favour issuance of a preliminary injunction of the Galaxy Tab 10.1. The District Court was persuaded by the Federal Circuit’s decision that the public interest would favour an injunction on the basis that the D’889 patent is likely valid and infringed by the Galaxy Tab 10.1, and that Samsung is not likely to establish that the D’899 patent is invalid at trial.

Based on these findings, the District Court granted Apple’s request for a preliminary injunction against the sale of Samsung’s Galaxy Tab 10.1 in the United States. Apple has since paid a $2.6 million bond as required to initiate the injunction to protect against damages suffered by Samsung if the injunction is later found to have been wrong. It is expected that enforcement of the injunction will likely take place in around one to two weeks time.

Samsung has since appealed the preliminary injunction against the U.S. sales of its Galaxy Tab 10.1, asking the District Court to suspend the order pending resolution of an appeal to be held at the Federal Circuit. However, Samsung’s request to appeal was rejected on 2 July 2012.

The US preliminary injunction follows an injunction in Australia that was later overturned on appeal, a German injunction that Samsung has so far successfully designed around (with the Galaxy Tab 10.1N), and a Dutch injunction that barred some Samsung smartphones but not the Galaxy Tab 10.1. Like it did in Germany, Samsung could offer a re-designed tablet that does not infringe on the iPad design patent, but it must be “more than colorably different” from the 10.1 and not embody “any design contained in D’889 patent,” according to the District Court ruling.

The granting of a preliminary injunction is a strong indication that the District Court believes Apple is likely to prove its claims of infringement at trial later this month, and could seek significant damages.