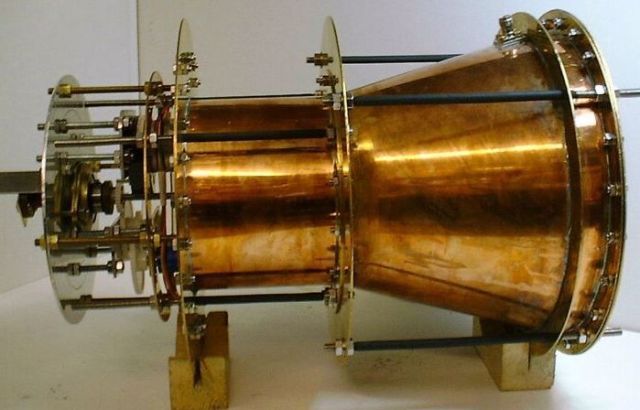 Are we required to revise our understanding of physics? The controversial EM drive goes against and seems to break, one of the physics’ most fundamental laws, Newton’s Third Law of Motion. And, moreover, there is no accepted theory of how to resolve this issue.

British scientist Roger John Shawyer first designed rocket engine that generates thrust without any kind of exhaust or propellant, and filed a patent application with U.K. Intellectual Property office for the same. A lot of controversy has followed after this invention of this first EM drive system and, since then, Shawyer has applied for patents for each and every tweak he brought to the design.

A physicist will say that, according to the law of conservation of momentum, in order for a thruster to gain momentum in one direction, a propellant must be expelled in the opposite one, and since the EM drive is a closed system with no propellant, it violates this law.

A month ago, an EM drive device built by American inventor and chemical engineer, Guido Fetta, was tested by NASA over an eight-day testing campaign and showed that a small amount of thrust was achieved inside a container without the use of any fuel.

What will happen next?

An experimental NASA lab, known as NASA Eagleworks, has conducted experiments on the EM drive and has repeatedly posted updates on the NASA Spaceflight enthusiasts forum indicating that their device has produced thrust – basically giving a positive prognosis on the EM Drive technology.

Further, NASA researchers announced that they will test the prototype in space and reported 10-week trial of their EM drive prototype, which led to Fetta being granted permission to test his own version in space.

Shawyer will most probably carry out first test flights of a flying car powered by EmDrive microwave space propulsion in 2017. Two companies who are also working in this field and putting the technology forward are, Terrafugia and Aeromobil.

Why is there such an interest in the technology? Probably because spacecraft equipped with a reactionless drive could potentially make it to the moon in just a few hours, Mars in two to three months, and Pluto within two years.