Branding using Trade Marks and websites and social media is important to your business.

What is in a name?

A lot when your business depends on it.

The importance of branding, and of not allowing your brand to be used descriptively, was illustrated recently in some advertising Channel 10 ran for a segment of their Shark Tank™ show.  Initially they used the expression  ”Another UBER idea” when discussing a carpooling system but then later seemed to withdraw such advertising.

Why? Because other companies have lost their trade marks through allowing them to become synonymous with the goods themselves.  A classic example is the general use of the word ESCALATOR.  Originally it was the name of a particular French company’s moving steps.

Some companies have managed to fight back against the loss of their mark in the same circumstances. Examples include DOONA™ and TEXTA™. The owners of both these trade marks have taken action to stop others using them to refer to a general class of goods.  The aim is to retain the mark as a badge of origin and not let it being used to describe the product regardless of where the product came from.  This includes stopping others referring to a DOONA™ as a particular item of goods.  The general descriptive word describing the goods is “eiderdowns”while the particular brand is DOONA™.  The general descriptive word describing the goods is “felt pens” while the particular brand is TEXTA™.

Proper use and defense of these trade marks, allows the owners to distinguish themselves as the sole source of the DOONA™ eiderdowns, and the only source of TEXTA™ felt pens.

A simple rule of successful trade mark usage is that your trade mark should be an adjective and not the name of the product.

How do you protect that brand?

It is important to use a range of channels to develop and protect your brand, including the use of some of these:

Each of these branding means has their registration system.  Most rely on the ‘first to register’ and will allow registration as long as there is not already that exact version already registered.  These channels are a useful way to establish and improve recognition of your brand.

However it is only trade marks ™ or registered trade marks ® that will give you enforceable ownership to your brand and prevent others from using confusingly similar marks on similar or related goods or services.

To be able to register a trade mark, you need a distinctive mark that is different to all other marks used on the same or similar goods and services.

The two main questions are:

An interesting way to illustrate this is a quick case study examining the difference between the Yellow Cabs™ for taxi services, and the Uber™ for carpooling services.

What are the same or similar goods or services?

These different classes do give one level of differentiation – however the goods in one class are not totally isolated from goods of another.  The second test is the need to determine  whether other marks in other classes would be considered to be goods or services of the same description.  The aim is to stop confusingly similar marks being used in similar or the same industry, which could confuse the public into believing the goods or services came from the one source.

A more confusing matter is the comparison of the mark  YELLOW CABS for taxi services and the mark  UBER for carpooling services.  On the basic review UBER would state they do not provide taxi services and this is why they do not believe they need to follow the taxi industry regulatory issues.  In particular Uber claims it is a request tool, not a transportation carrier. The Yellow Cabs taxis and other taxi services believe that UBER are in the industry but avoiding the regulatory issues, which require expensive taxi licences to be bought and renewed each year.

The current discussion is not on what the government should do for taxi services regulations, but on how the trade mark registration system applies, as an example, in these two competing but different services.

Reviewing the records of the Register of Trade Marks of the Australian Trade Mark Office (IPAustralia) it is noted the following registrations:

Yellow Cabs is registered for:

Uber is registered for:

There is a distinction between taxi services and a booking system but there is an overlap in that communication for booking of transport is required in both. It is therefore suggested that they are goods and services of the same or similar description.

The rules to selecting goods or services for your registering marks

Is your mark distinctive and registrable or is it a descriptive mark?

The answer to this could be it is descriptive if it falls within the grounds of:

The basic test for descriptive marks is:

whether the mark is one which other traders are likely in the ordinary course of their business and without any improper motive, desire to use upon or in connection with their same or similar goods or services.

Within a few short years of their appearance on the streets of Chicago, Yellow Cabs became a common sight on the streets of four of Australia’s capital cities. Legendary American businessmen such as John Hertz (later of rental car fame) and Joseph Kennedy (father of a future president) were involved in the early days of the Yellow Cab Company in the USA.

P.W. Tewksbury registered Yellow Cabs of Australasia Limited on the 10th March 1924. He negotiated for an Australian franchise and the right to import cabs from the USA. On 15th October 1924, 100 imported American Yellow Cabs took to the streets of Melbourne. Large advertisements in the city’s daily papers stressed the new economy of travel (1/3 for the first third mile and 6d for every third mile thereafter, 9d for every passenger who travels 2 miles or over, 6d for every 5 minutes of waiting and no charges for children under 12 years of age).   The Melbourne Herald was suitably impressed and this article appeared on the front page in late 1924.

“The outstanding feature of this new taxicab service from the public point of view is that the cabs are fitted with taxi-meters, which tick off the fare as you go along. Thus, as in most other big world cities, the taxi patron knows exactly what he is going to pay.”

“The trim yellow vehicles challenged the eye in the street today. Driven by men wearing smart brown uniforms, the cabs glistening in their brand new coats of paint, made a vivid picture against the drab background of the city.”

“Melbourne people were able to do what Londoners have done for years – to hail a taxi in the street.”

In this stage the colour yellow was considered distinctive and other taxis needed to be other colours such as the Black and White Cab.

The idea of the Yellow Cabs from 1924 was a hugely popular approach and in the US and Australia a number of companies called Yellow Cabs occurred indifferent cities.  This was allowed to happen probably due to taxi services being limited to a city and that multiple ownership of similar businesses was not common in the 1920s to 1950s.

Due to the importance of taxis in the public transport system of a city the control, regulation and safety of taxis became a concern of the city councils, local governments and state governments.  However the Premier of Victoria in an attempt to improve safety and easy recognition of taxis and to follow the New York approach detailed that all taxis in Melbourne needed to be yellow.  Later, green-roofed yellow ‘night’ taxis were introduced, with lower cost licenses, in order to provide more taxis at night.

The rules to registering colour marks

It can be considered that Uber is a descriptive mark in that in German it means “great” or “above” or “exceeds”.  There is a reasonably large German reading population in Australia.  The word Uber has been used generically in Australia.  In the Oxford dictionary it can be placed in front of a number of words so as to denote an outstanding or supreme example of a particular kind of person or thing.  However the question of registrable trade mark does not end there.  Extensive use or other special circumstances could apply.

Uber makes a playful claim on their website that in 1492, European explorers arrived in the New World, introducing horses, sugar cane, smallpox, and smartphones to America. They also state that the first Uber ride request is sent via telegram in 1849: 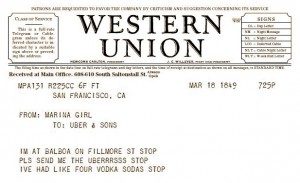 Their more serious brand statement is that “Uber is evolving the way the world moves. By seamlessly connecting riders to drivers through our apps, we make cities more accessible, opening up more possibilities for riders and more business for drivers. From our founding in 2009 to our launches in hundreds of cities today, Uber’s rapidly expanding global presence continues to bring people and their cities closer.”

Stage 2. Registration of the Uber mark

Stage 3. Registration of the UberX mark

It is not clear whether the company decided to register this mark due to a commercial progression to a new product or service (the mark UberXL is also in use), or whether they realised that they needed a more distinctive trade mark than a word that is in general use.

It is certainly a better strategy to register a distinctive combination of words than a single, common word.

UberX was filed in 2014 and is still to be registered for:

The rules to registering Descriptive marks

In this way and with extensive use you can register and enforce the mark:

while you could have trouble with enforcing the very descriptive:

but it is much easier to register and enforce marks that might include descriptive elements but provide a distinctive combination such as: UberX™ or Baxter IP.

Talk to us at Baxter IP with your branding issues whether you require trade marks or protection through other legal means or commercial approaches.